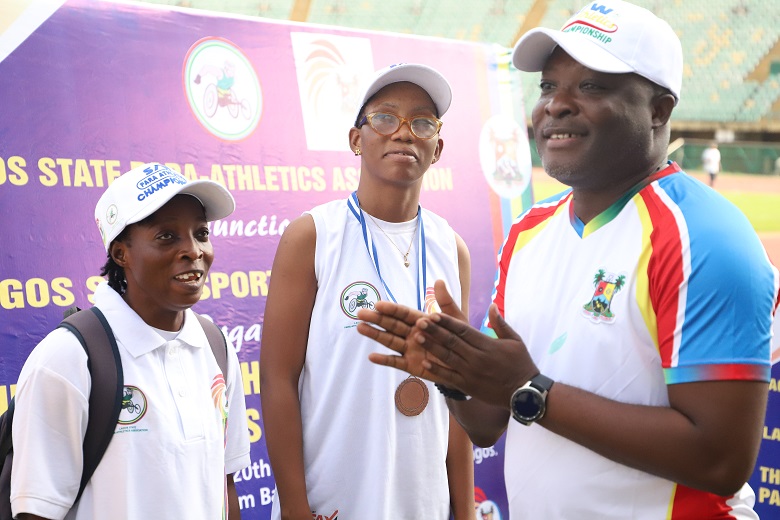 The competition is aimed at supporting people living with disabilities, especially at the grassroots level.

Speaking at the Closing Ceremony of the 3 day event, Executive Chairman, Lagos State Sports Commission, Sola Aiyepeku, revealed that the whole idea is about inclusion of all in Sports.

“We brought in the Women, now we have stepped up to make sure that the physically challenged have their own platforms, and this is just the first”.

“This is a clear statement from Lagos showing that, it’s not only about getting reward, it is about giving them the regular Competitions so that they can improve and do it better for Nigeria”.

Director General, Lagos State Sports Commission, Oluwatoyin Gafaar, said the initiative is in line with the “THEMES” agenda of Gov.Babajide Sanwo-Olu which includes bringing both male and female,able and Physically Challenged Athletes for Sports development.

He disclosed that to develop Sports in Lagos State and the South-West, Lagos needs to take the lead role and that is the reason for the maiden  South-west regional Championship.

“Able Athletics event was held recently and engaging our Physically challenged Athletes is a way of preparing them for better outings and a better tomorrow. “Apart from the financial gains, they need to get prepared, active and it will also contribute to their healthy living”.

Chairman, Lagos State Para Athlethics Association, Rafiu Olawale Etti, stated that the motive of the Competition is to create an enabling environment for the Athletes to showcase their talents and to encourage mass participation of people living with disabilities in Sports, and also to contribute to the development of Para Sports, as an alternative means of sustaining the livelihood for persons living with disabilities.