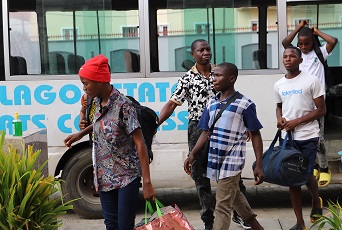 The Director General, Lagos State Sports Commission ,Oluwatoyin Gafaar has charged the Coaches of the 33 Sports who resumed  in Closed Camp ahead of the Year 2021 National Youths Games coming up in Ilorin, Kwara State from 10th to 20th, October, 2021, to be disciplined and at the same time strive to instill discipline amongst the Athletes in Camp.

He made this disclosure on Sunday when the  Coaches and 260 Team Lagos Athletes that will represent  the State checked in at the venue of the Closed Camp in Bariga, Lagos State.

” As Coaches, you have to be disciplined and try as much as possible to instill discipline among your Athletes”.

” Any act of indiscipline from any  Coach at this Camp would not be condoned “, the Director General said.

He went further to state that the welfare of all the Athletes in the camp is paramount and cannot be compromised.

” The Chairman, Lagos State Sports Commission and myself as the Director General will not accept any lapses or wrongdoings  that can affect any of our Athletes here in Camp”.

” All these Athletes are our children and we must protect and take good care of them during the closed camping activities and during the National Youth Games in Ilorin”.

The Director General urged the Coaches to put in extra efforts to enable Team Lagos to improve on the total number of Gold medals to be won.

” We have to improve on the total number of Gold medals that the State won at the last National Youth Games”.

” It is not good enough for us to continue to maintain a  distant 2nd place following Delta State that won over 100 gold medals with us only able to win 22 gold medals”.

“This time around, we must try as much as possible to win up to 70 gold medals or more”, he concluded.

The Closed Camping activities for Team Lagos Athletes to participate at the 6th National Youth Games in Ilorin will end on Sunday 10th October when the Contingent will leave for Ilorin,  the Kwara State Capital to compete in 33 Sports with their counterparts from the36 States and Federal Capital Territory.

Team Lagos was placed 2nd at the 5th edition of the National Youths Games held in Ilorin in  Year 2019.